How it all started…

In the last year and a bit, many of us have changed a lot in very drastic ways for some.

Not everyone can, or even enjoys working from home, either there are too many distractions, or they are unable to set aside a space to work, and/or even have trouble maintaining their previous work/life balance.

For me it was actually quite easy, maybe it’s because I can be a less social person, maybe it’s because in general I have been a loner much of my life and tend to prefer my own company. While I did enjoy the banter and occasional distractions that came from office life, a year later I am finding I am still not missing it.

For me it started just before my country, South Africa, went into lockdown. The Sunday prior we got emails, slacks and even WhatsApps from the CEO informing us that the office is being closed for safety reasons, we need to go fetch anything we need from the office and avoid it unless it was essential. A few days later, Thursday, we went into our lockdown which was meant to last for 3 weeks and ended up being 5.

The first week or 2 was tough, but I feel that in my specific case it was not the isolation from work, as to help mitigate we setup discord channels to maintain the office background noise, we already had a remote-like culture as many of us worked from home 2 days a week in general so we were all used to a certain level of communication disconnection.

For me I feel that it was the general life that I lost touch with, I am a pretty active person walking my dog for 45–60 minutes each day, running or cycling 5–6 times a week and in practically a single day I ended up in a form of “prison” is limited to my backyard, which was not all that big. Honestly once I got past my own short term bout of crazy, I felt mostly for my dog, at least I understood what was going on, why I was trapped in my own home. She had gone for walks daily for years by that point, meeting with other dogs, running around and being social, she’s way more social than I am. LOL. 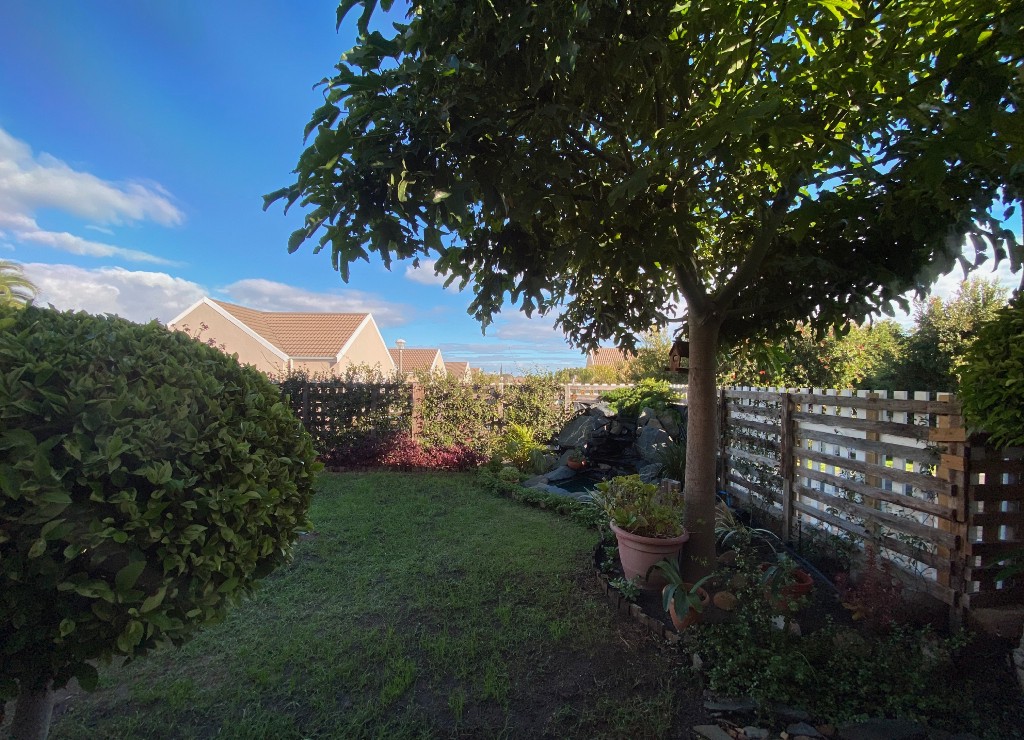 View from my “Office”

Adapting to the new normal…

For me, and pretty much every member of my team, the WFH just worked, we had many ad-hoc calls and discussions throughout the days and we all felt that for us, that was enough and that from a work standpoint we were all being more productive and most certainly during the initial 5 weeks put in probably an unhealthy amount of overtime, but when you practically have nothing else to do…

I put an end to that once we got out on the other side, once we had regained some freedom of movement, but even discussing with my boss, the CTO at the time, we both agreed that the office, at least for the developers was no benefit and we had no intention of expecting any form of return to “normal”.

At that time, I was still working in my bedroom, a few hours each day even from bed, which for me had no impact on my productivity, almost everything you read tells you that for effective WFH you need to maintain schedules, get dressed, take breaks and try and maintain as much of the “office” lifestyle as you can. Clearly, I do not fit into that bracket, I was productive in bed, in my pyjamas while having breakfast, after maybe 2 hours I would move to my standing desk and carry on there. All of this worked for me, and it probably would not for everyone else, and I worked like this for months, about 9 to be precise.

While I personally never got to a point where I felt I was unable to maintain a work/life balance, as I started early in the day, like 5/6 am, earlier than I would have at the office, took maybe a longer lunch and still finished off at 3/3:30 in the afternoon and still went for my run or ride and walked my dog.

In December last year, I both realised and decided that this whole WFH thing was not going to change, our office was very optional, I went at most once a month and every recruiter who mailed me get an initial response of “Is it remote?”, I had no plans on ever going back to an office and for this reason, I decided it was time to buy a house, purely for the 3rd room which would be set up for an office, abandoned my plans to leave the country realising that I do not need to be in another country to work for a company in that country, the world was adopting a more remote working philosophy. 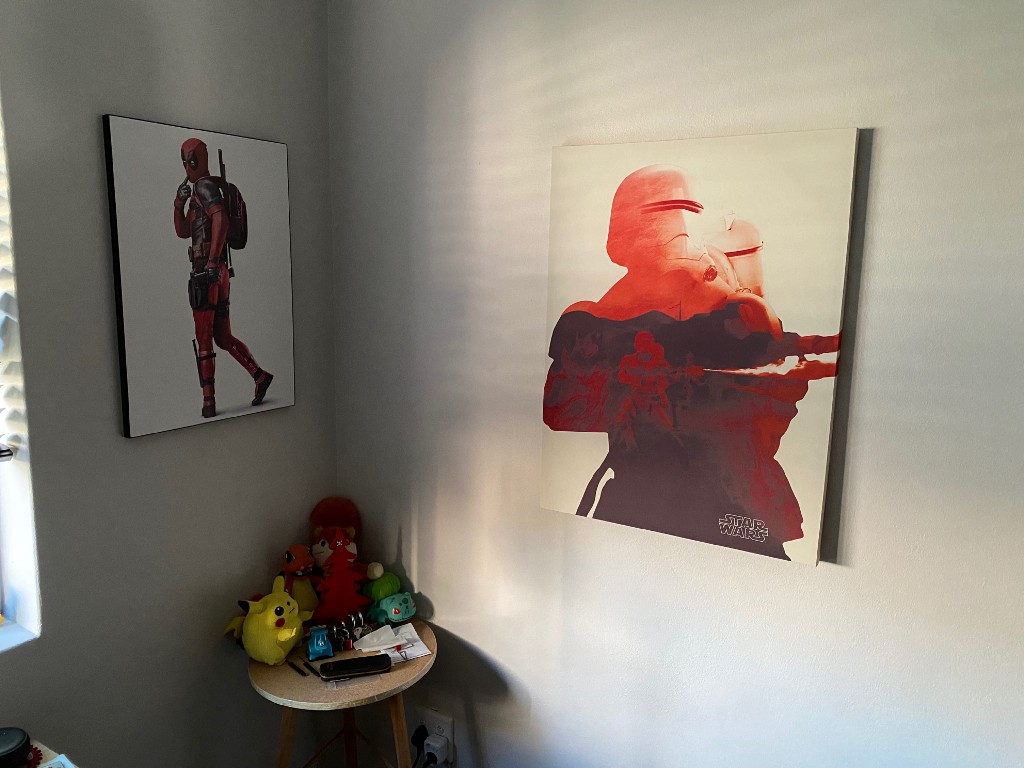 Some artwork, memories and hobbies. I dabble in lockpicking…

Today I have that house and that office which you can glimpse in the leading image. It’s set up specifically for work and even though I never felt the need for the hard separation, I am pretty sure it would have eventually come to that, hence the decision to buy.

The Mac pretty much never leaves the office, unless I head off to a coffee shop to work from there. It is set up specifically for how I like to work.

I have both a seated and standing desk to work from which I alternate between. The seated desk has a high-back chair and the standing desk has a padded bar chair with a short back in case I actually need to sit while I am there. Having 2 desks also allowed for the option for one of my team members to work from my office, one has taken me up on it already and worked from here instead of the office as well, there are fewer people in my office and I am anti-social so probably a safe person to be around in a pandemic.

There are also debugging tools on the desk, you may have noticed the rubber duck and the lego Pandalf, that way there is always the 3rd opinion if ducky and I disagree on something.

I have a wireless charger and a mini cabled charging station with braided cables because they just look nicer and work better with my rubber cable holder.

I have a desk-pad, for no other reason than it looks nice and I have 2 echo minis set up as a stereo pair for working music, being alone I saw no reason to keep wearing my noise-cancelling headphones, which were never comfortable for long stretches anyway.

As for decoration, the 2 red spring you may have noticed are old coil springs from my mountain bike and then mostly movie posters and other random nick-nacks decorating the office.

Then let's not forget the view which you may have seen higher up in this post, the house did come with a very nice front yard, with a large tree outside my window, great for summer and keeping the sun from overheating the room, less so for winter, gets chilly. There is also the water feature/fish pond and I can even sometimes see the fish swimming around if they on the one side of the pod. 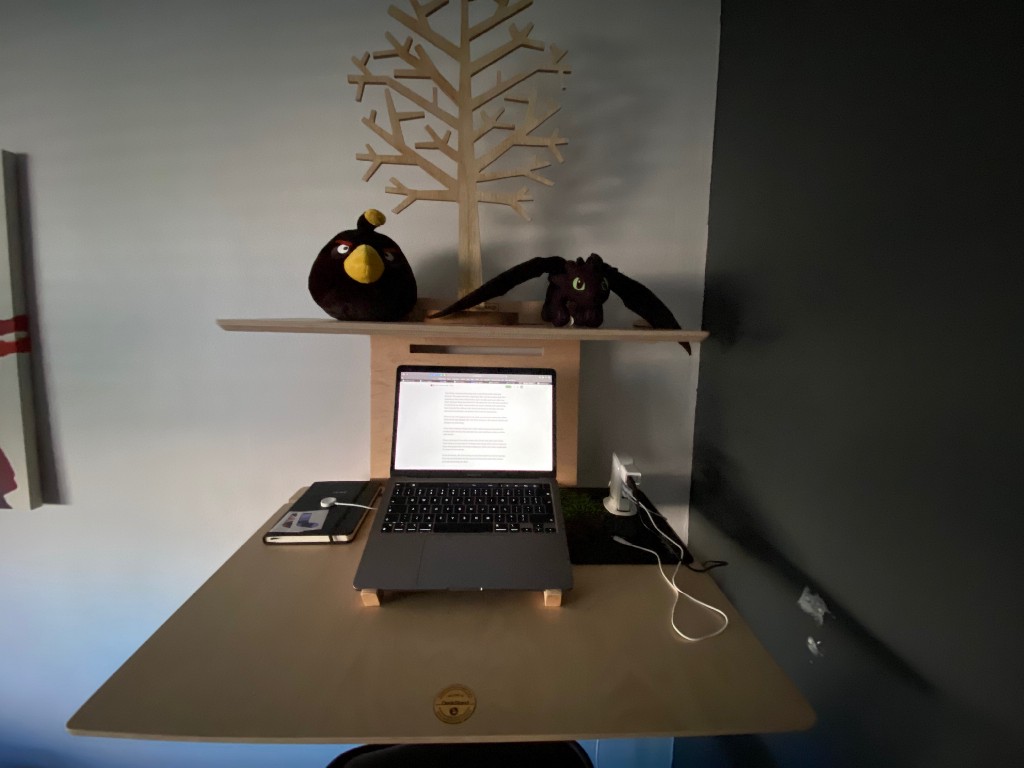 The standing desk, with more plushies, I like plushies…

I said it before, but working from home is not for everyone, if you one of the lucky ones that not only has the option but also the ability and maybe even personality to enjoy it, then awesome. At least when it comes to development, I cannot speak for other industries, the job really is a passion one, for many of us (I hope) we are getting paid to do what we love and maybe that makes the WFH thing easier, let's be honest, many of us would probably be coding anyway.

Unless I have a great idea, something important I want to do or learn, I avoid even opening the Mac when I am not working, as much as I enjoy coding, that is a balance boundary I set for myself many years ago and maybe that made it easier for me to maintain the work/life balance when work and life merged into the same building.

If you are working from home, make the most of it, make it your own space, something that you feel comfortable and productive in, maybe toss in a Happy Sack for those long meetings where you won’t be talking and can leave your camera off, just try and not nap…

I hope you found this interesting, and if you have any questions, comments, or improvements, feel free to drop a comment. Enjoy your Flutter development journey :D

If you enjoyed it, a like would be awesome, and if you really liked it, a cup of coffee would be great.